What is Minerva Chirurgica?

Minerva Chirurgica is the most prestigious Italian scientific journal. It is published by the Minerva Medica Publishing House, which continues its activity on the path traced by its creator since 1943. Step by step it has developed an intense scientific production in all areas of medicine.

Currently the Edizioni Minerva Medica S.p.A. besides Minerva Chirurgica publishes about forty scientific journals. All journals are reviewed in the most important international bibliographic indexes. For this reason, many of these are official bodies of national and international scientific societies.

What is a scientific publication

What is the Micropricking that Minerva Chirurgica talks about

Minerva Chirugica magazine describes the innovative micropricking treatment. This treatment allows you to reduce wrinkles, fight skin laxity, give the lips turgor. It also stimulates the closure of dilated pores, reduces blemishes on the face and fades the furrows of acne scars.

The study done by Minerva Chirurgica reproduces, through the stimulation with the new technique, micropricking, what happens in the skin when the body suffers a wound.

In fact, when we injure ourselves, our body activates a series of processes aimed at the immediate repair of the skin. It is these repair mechanisms that involve enzymes and proteins and activate the reconstruction process by producing collagen and elastin.

The operating mechanism of this treatment is innovative because it does not directly produce a change of tissues but induces the tissues to modify themselves, creating a mechanical bio-modeling of the skin. And it is precisely this that makes the results of the treatment so exciting and stable over time.

For the scientific publication of Minerva Chirurgica on the validity of the “micropricking” technique, we thank the company Beautech. http://oneneedlab.it/

Description and validation of a new non-invasive tool to stimulate collagen production. 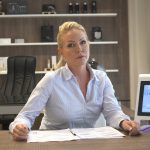